The Thieves of Waterdeep 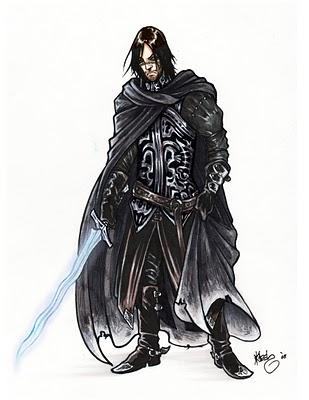 With return of the Tablets of Fate to Ao, the Faerunian Pantheon returned to the planes. This left Cyric feeling whole, the pretence of being a goody goody two shoes could come to an end….. ah the look on DOOMs faces would be priceless. First thing though is getting the house back in order. With MASK once again giving power and support the base needed to be re-consecrated. This time with new infused knowledge securing the temple with Forbiddance was a simple step. Not only would it stop annoying spy’s teleporting in but any not true to MASK would suffer. The thought of this made Cyric giggle.

For Cyrics plans to succeed those silly mages with the ESP and location needed to be stopped….. Arrangements were made for Sithus to appear as Cristo every now and then leaving more time for Cyric to become closer to his god. Praying to MASK took time. At first the prayers were not answered. It wasn’t for a full tenday that MASK appeared to Cyric…. A being wrapped in shadow, which Cyric assumed could only be MASKs avatar, just strolling through the temple and demanded a task performed. Write the tenants’. Prepare the faithful. Cyric trembled and began. For what seemed like months Cyric wrote and wrote. Cyric began to suspect that MASK was tampering with time, most unnatural. When Cyric could beg a minute for a break he would sneak outside only to discover the clouds not moving and a very eerie silence. This only unnerved Cyric more sending him hurrying back to the temple. At the “end” of each day Cyric would ask the same question.

“My lord are we there yet…. cannot we infuse your symbol now.”

Eventually MASK relented. Cyric wondered if MASK only agreed to infuse his holy symbol as a way shutting Cyric up. The result was worth it…. MASKs holy symbol infused with the ability to mask (pun intended) thoughts and stop those trying to locate Cyric via magic. Finally the tome was also completed. The avatar stepped into a shadow and vanished leaving Cyric alone with his thoughts.

As Cyric emerged from this period of seclusion Cyric began to note other changes as well. It was almost as if MASK was spreading his power more. He never felt closer to MASK, he was granted access to use high levels of divine power that Cyric previously thought unattainable and granted powers directly relating to MASKs new portfolio shadow. Wouldn’t this make his “friends” be jealous.

by: enluki
See All Pages

I'm sorry, but we no longer support this web browser. Please upgrade your browser or install Chrome or Firefox to enjoy the full functionality of this site.